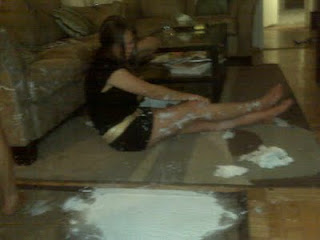 So today I woke up and prayed that last night was a dream. Sadly, it was not. I walked out of my bedroom to find that my living room was still covered in light blue paint. My apartment looks like a freakin‘ Jackson Pollack – splatters of paint all over the coffee table, couch, rug and a giant blob of paint on our carpet! It all happened so fast – one second my roommate was holding up a bag, the next it dropped and out came a can of paint which hit the floor and flew everywhere. I of course, was right in the line of fire. Three showers later, I am still finding paint on those hard to reach places, as well as stuck in my hair. I look like at the young age of 24, I already have some greys! A futile attempt to get the paint out of the carpet was made and now it lies rolled up, a carcass left from the scene of the crime. Lucky for my roommate, the paint was meant for her new apartment so while she has somewhere to escape to, I am stuck in an apartment that looks like a smurf vomited all over it.